This last Wednesday we packed up the trailer with the instruments and camping supplies and headed for Beanblossom, Indiana. So many different styles of music and bands growing from bluegrass and folk roots coming together for 4 days in honor of John Hartford, a great influence on today's new grass sound.  The John Hartford Memorial Festival was so welcoming, full of love and peace. People there were so nice and the jams were some of the best I have heard.  Beginners or pro, everyone got to jam and everyone got to take a solo.  I love to see people build each other up and I saw musicians building other musicians up this week.  I am so grateful that we got to play and be a part of this festival and meet all of the talented musicians and kind people that we did, and I hope we get to do it again.

Though we had an amazing time at the John Hartford Festival, we came home and discovered some heartbreaking news.  Georgia opened her fiddle case to find her fiddle with some issues so she and Mom took it to our luthier, Martin Brunkalla (www.brunkalla.com), right away.  Though Herman Anderson(Georgia’s fiddle) can be repaired, it is very costly and would change his sound entirely.  So now Georgia needs to retire him and find a new fiddle to play, an instrument like Herman is going to be tough to replace.

If you ask me what I would grab if my house was burning down I would tell you that I would grab my little sisters fiddle.  Some people think that is odd.  Why? Just a fiddle, and it isn’t even mine!  But Herman Anderson is more than my little sisters fiddle, the backstory behind that fiddle has a lot to do with the Georgia Rae Family Band and why we are today.
Herman was given to us by my uncle who got him from a man who was dressed as a Richmond police officer.  The nameless fiddle was in rough shape but we took him to Martin, who made him playable again, and to our surprise his voice was amazing. Herman had a sound that was like no other, and every fiddler who played him would tell you that. I remember how excited and pleased Georgia was when she got to play him and heard how he sounded.  While Martin was doing the repairs Mom and Georgia tried to find out the history of the fiddle.  In the fiddle case they found some old receipts, a few string mutes and a fiddle blanket.  The receipts read only one legible signature and it said “Herman Anderson”, so that is what Georgia named him.  Herman turned out to be a nicer fiddle than we would have ever been able to afford, and his soul is priceless.  Georgia and mom wanted to thank the officer who gave the fiddle to our uncle, but when they went to the station (small police station, we live in Richmond) they said there was no officer who fit the description.  You can think what you want, but I think God had an angle place that fiddle in Georgia’s hands.
After Herman, Georgia seemed to step up a rung on the latter, she really started to play more and more. Fiddle had always been her thing but at an age where she could have branched off and done other “normal” middle-schooler things, she didn’t, she was driven and motivated to play.    The more she played, the more mom played, the more we all played together and started picking up more instruments.  The band formed on financially hard times, but our sound and our music as a family grew together after that fiddle.
I have seen Georgia take huge strides in her playing since she has acquired Herman.    In the past six years I have seen her go from tunes like Lovers Waltz by Jay Ungar, to tunes like Jeanne by Calvin Volrath.  She has won 4 state fiddle championships, and holds 2 State Twin Fiddle Champion titles. She practiced Herman everyday, taught with him every week and jammed with him every night of every music festival.  When you play an instrument the way she does you grow a bond and connection to the way it plays.  Not a day went by that he hung on the wall.  Herman went out doing what he loved, no doubt.
For now Martin was so kind to lend Georgia a fiddle to try, so she has something nice to use in Weiser this year, with the option to buy it.  I have to say that I really like the way it sounds and it is really beautiful fiddle, whether we find a way to somehow afford the Brunkalla fiddle, or if Georgia ends up with something else, Herman’s shoes are big ones to fill.

I watched Georgia play today.  I saw her raise the bow just above the strings, and with a deep breath, her face said “we’ll see about this one” and she touched the bow to the strings. With every note she silently judged the young fiddle.  Scrunching her brow just a bit, as she feels her way around the fingerboard, the spacing was familiar but  there were no worn grooves to set her finger tips in.  I could tell she was listening for that deep mellow sound when she hit the low notes.  Closed eyes, but she was searching for age and the character.  She misses the way that Herman rested, just right, between her shoulder and chin.  The voice of this fiddle is colorful, and has great tone, a blank slate for someone to wear the finish at the neck and the chin rest and give it a story. 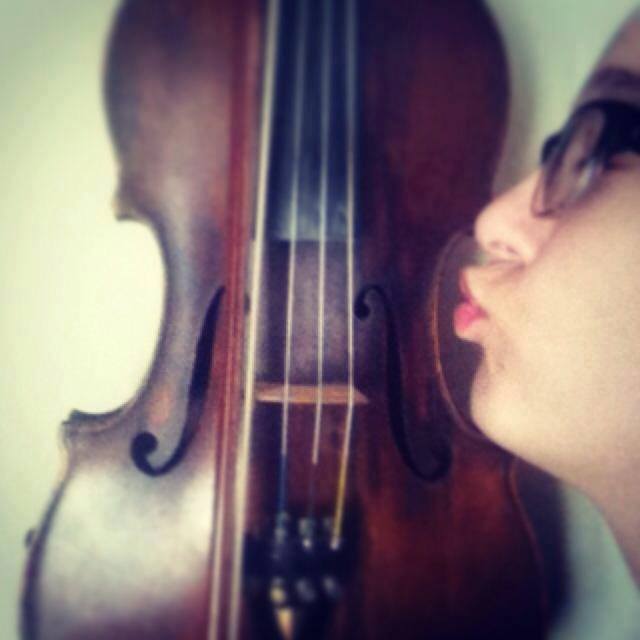 Georgia Plays Herman at Solo and Ensemble in 2011, not long after having him repaired-https://www.youtube.com/watch?v=M4BKB3sC-8k

Posted by Unknown at 9:12 PM No comments:

Links you should check out